A place for community and general discussion. 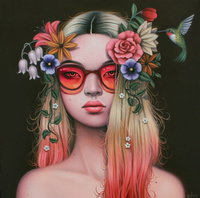 These past few weeks have been tumultuous in the fight not only for human rights, but most of all, especially, for women’s rights. A number of states — Alabama, Indiana, Georgia, Ohio, and Utah, most notably — have passed this nation’s most controversial abortion legislation to date. For example, Alabama’s abortion bill threatens doctors who perform abortive procedures with a felony and 99 years in prison; it also stripped allowances in case of incest or rape. Now the only way a woman can get an abortion in Alabama is if her life is in danger or the fetus is suffering from a “fetal anomaly.” Similarly, Georgia’s new anti-abortion bill is extreme in that the cut-off time is six weeks, a period of time at which many women don’t even know if they’re pregnant. The penalty for obtaining an abortion is “imprisonment for not less than one nor more than 10 years,” though it is not clear who will actually face prison time, doctor or woman. Of little comfort is the fact allowances for incest and rape remain. Ohio’s new abortion bill is direct and blatant spit in the face of science. Ohio’s bill removes allowances for incest or rape, strips insurance coverage for birth control, or “devices that prevent the implantation of a fertilized ovum,” and says the only allowance for women is in the case of an ectopic pregnancy, a procedure may be performed in which the “fertilized ovum” is moved from the fallopian tube and into the woman’s uterus — here’s the kicker, though: such a procedure isn’t even scientifically possible.

What is even happening?

The national race to pass new legislation began last fall, after President Trump chose Brett M. Kavanaugh to replace Justice Anthony M. Kennedy on the Supreme Court, adding what some predicted would be a fifth vote to uphold new limits on abortions.
-- The New York Times , 05/15/2019

It would seem conservative-majority states are hurriedly making out their anti-abortion legislation because with Kavanaugh now on the panel, it’s more likely their bills will succeed at challenging the long-standing Roe v. Wade ruling of 1973.

Could there be another angle?

Other recent news follows the low birth-rate in the United States. In fact, it hasn’t been this low in 32 years. In 1936, following the Great Depression, fertility was 75.6%, compared to 59% in 2018. The CDC attributes this alarming trend to dropping fertility rates.

Birth rate is important for humanity as a whole because it determines how well we are replacing ourselves. According to NBC :


For the nation’s population to reproduce itself at current numbers and remain stable, the total fertility rate would need to be at least 2,100 births per 1,000 women. So, essentially, for the population to remain stable, each woman needs to have at least two babies. At 2,000 there would be enough children to replace fathers and mothers. The extra 100 is to account for deaths.

A publication titled Abortion, illegitimacy, and the American birth rate , written by J. Sklar and B. Berkov and published in 1974, just one year after the Roe v. Wade ruling, provides some interesting and potentially illuminating information. The summary of the publication reported the following findings:


In sum, it appears that legal abortion depressed overall fertility, but particularly illegitimate fertility, by giving women an opportunity to terminate their pregnancies when other means of birth control either had not been used or had failed. If legalized abortion had not been available, an estimated additional 39,000 illegitimate babies and 28,000 legitimate babies would have been born in 1971 in the United States. While this makes up a small part of total births (3,500,000), the illegitimate births prevented represent almost onetenth of all out-of-wedlock children born in the country in that year. In addition to preventing these births the legalization of abortion appears to have reduced the incidence of pregnancy-related marriages and thereby may have helped to limit subsequent marital disruption. Finally, legal abortion prevented large numbers of illegal abortions from occurring. Our data indicate that well over half-most likely between two-thirds and three-fourths-of all legal abortions in the United States in 1971 were replacements for illegal abortions. Further declines in illegitimate birth rates for the country as a whole will depend, in considerable part, on the extent to which legal abortion becomes more readily available and more widely used. Theoretically, greater use of efficient contraception could also cause illegitimate fertility to decline. But there are many reasons why women do not use efficient contraception even when they know about it and have access to the materials (25). Even though the use of abortion throughout the nation is now legalized by the Supreme Court decision, this does not necessarily mean that services will in fact be everywhere more readily available. Our interstate analysis suggests that should the liberalization of abortion laws be reversed, not only would there be an upturn in illegal abortions and pregnancy-related marriages, but also a marked rise in illegitimacy, particularly among women who do not have the means to obtain an illegal abortion.

Could it be possible this is some desperate attempt to force women to complete their pregnancies, will be damned?

Whatever your feelings on the subject, and despite all the knowledge of the science of pregnancy, abortion and adoption readily available at our fingertips, there is still such a stigma surrounding them — that women obtaining abortions are using them consecutively in lieu of birth control; or that these women are promiscuous gluttons of men. Factually, however, this is not the case. So the rest of this post will be educational, correcting the incorrect myths that are shaping these disturbing laws.

Let’s clear the air about abortion


“At six weeks, the embryo is forming what will eventually develop into mature systems. There’s an immature neurological system, and there’s a very immature cardiovascular system... [the activity] is a group of cells with electrical activity. That’s what the heartbeat is at that stage of gestation … We are in no way talking about any kind of cardiovascular system.”

Just some horrid adoption statistics
Let’s give the good-ole adoption sitch a look-see. The following stats are courtesy of National Foster Youth Institute :

The following stats are courtesy of Adoption Network :

A separate study to describe the characteristics of girls in foster care who exhibited sexually abusive behavior focused on evaluating the sexual abusive and aggressive behaviors of 155 female children and adolescents, aged 4-17 years, and found that:


Conclusion
Grow up. Accept the fact that some kids are unwanted. Accept the fact that it’s none of your business what a woman does with her body. By “saving” these fetuses from abortion, you’re actually condemning them to a life in which the cards are statistically stacked against them. How many of the half a million already in foster care are you personally going to adopt? Or are you gonna just wait for them to age out so you can continue bitching about the poverty levels and the amount of people on food stamps and WIC and living in Section 8 housing? A statistic you’re contributing to by sticking your nose in the extremely personal and private decisions of another individual.